in order of their distance from the sun: Pluto | Haumea | Makemake | Eris 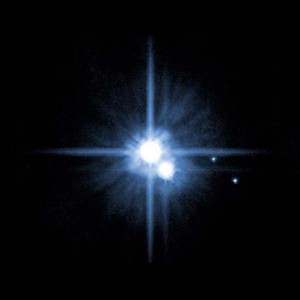 Illustration:
Pluto and its moons Charon, Nix and Hydra, photographed in 2005 by the Hubble Space Telescope.

Since its discovery in 1930, Pluto was considered to be the 9th and outermost planet of the solar system. Since 2006, it has been classified as a dwarf planet. Its distance from the sun fluctuates from 29 to 43 astronomical units. A complete orbit takes 248 years.   It’s one of the approx. 1000 known trans-neptune objects of Orian’s belt.

These objects move in almost circular or strongly elliptical orbits that are 5 billion to 150 billion KM from the sum. Pluto and its moon, Charon, orbit each other in a 6-day, 6 hour double bond rotation, meaning that they always face each other on the same side as our moon faces the earth.

The NASA probe New Horizon started toward Pluto in 2006 and will fly by Pluto and Saturn in 2050.

Pluto was named after the Roman god of the underworld (Hades in Greek). Charon carries the name of the boatman who brought the shadows of the dead over the river Styx into the realm of the dead. 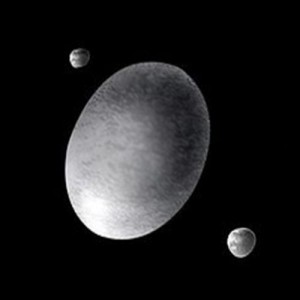 Haumea rotates once in four hours around its own axis of rotation and is therefore very flattened. 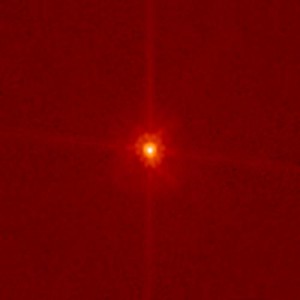 Illustration:
The bright light of the dwarf planet Makemake, picture taken by HST in 2006

Makemake is a spherical dwarf planet of the Kuiper Belt, named after the goddess of fertility of the Easter Island. It was discovered in 2005 at the same time as Haumea and Eris. Its mass is unknown, because no moon is discovered till now to calculate the mass with its orbital periods. 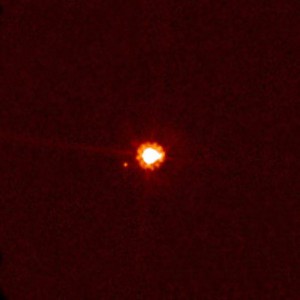 Illustration:
Eris and its moon Dysnomia, photographed by HST in a longtime expositoure.

Eris is the largest and most distant dwarf planet. One year on Eris lasts 557 years on earth, it takes sunlight 9 hours from Eris to reach the earth.

On the Danube Planet Trail  a bike ride from Eris to the Sun model will take about half an hour. So you will move with multiple light speed in this model.

Sun
Stone Planets
Gas Planets
In order to optimize our website for you and to be able to continuously improve it, we use cookies. By continuing to use the website, you agree to the use of cookies.OKMore
Scroll to top