The Stone Planets (or Terrestrial Planets)

in order of their distance from the sun: Mercury | Venus | earth | Mars 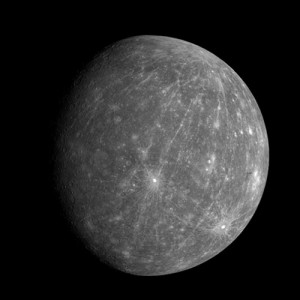 Illustration:
Mercury, photographed from spacecraft Messenger on January 14 of 2008, with many craters of meteorite impacts.

The stone planet Mercury is the closest planet to the sun, as well as the smallest and fastest.  Its surface temperature fluctuates from- 173 degrees Celsius on the dark side to +473 degrees Celsius on the sunny side. Its elliptical route is very eccentric with a distance from and sun from 40 to 70 million km. Because of its small size and the high temperatures, it has almost no atmosphere. Its hard surface is covered in craters.

Its revolution around the sum lasts only 88 days and is therefore named after the Roman deity Mercury, the messenger to the gods. A day of the week is also named after the planet: Mercredi (fr.) or Mercoledi (it.)

Mercury is a chemical element with symbol Hg and atomic number 80. It is commonly known as quicksilver and was formerly named hydrargyrum. 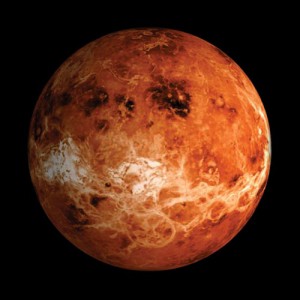 Illustration:
Radarsnapshot of the Venus and its rocky Surface, shot by spacecraft Magellan

The rocky planet Venus is almost as large as the earth. It has an atmosphere of carbon dioxide (96.5%) and nitrogen (3.5%). The pressure on the surface is the same as  920 m below sea level on the earth (92 bar). Venus has meteor craters and volcanic mountains. Because of its proximity to the sun and the green house effect, the temperature in the cloud cover is 460 degrees Celsius. The atmosphere also contains sulfur, sulfuric acid and sulfur dioxide.

Because it is closer to the sun than the earth, it sometimes glows brightly as the morning or the evening star in the east or the west. Galileo already observed in 1600 that Venus has different phases (Venus crescent, half Venus) like the moon. 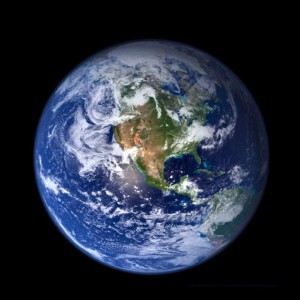 Illustration
The blue planet Earth with the blue south ocean, the brown and green subcontinent South America and white clouds, composed by NASA.

With 150 million km, our home planet, Earth, has just the right distance from the sun to maintain liquid water and an atmosphere. Light from the sun reaches the earth in 1.3 seconds. This distance of 150 million km is called an astronomical unit (1 AU).

The Earth is the largest rock planet with a liquid core, consisting of iron and nickel ,and a crust, consisting of silicates, oxides and traces of other elements. The atmosphere, which is only 640 KM high, consists of nitrogen (78%), oxygen (21%), inert gasses (1%), CO2 (.04%) and water vapor.

The Earth is the only planet on which liquid water, higher life forms and breweries are found.

The seasons result from the 23 degree tilt of the earth’s axis against the earth’s orbit during a cycle of the sun.

The moon orbits the Earth at a distance of 384,000 km within 27.3 days, always showing us its same side. It stabilizes the direction of the Earth’s axis and prevents the earth from teetering any further. 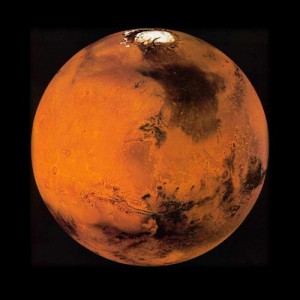 Mars is only half as big as the Earth and is 1.5 times as far from the sum. The rock contains iron and is rusty. It has two polar caps of ice and dry ice. Its atmosphere has a low density and consists of 95 % CO2, 2.7 % nitrogen, 1.6 % argon and 0.2 % water vapor. The temperature varies between -133 degrees Celsius at night and 27 degrees Celsius during the day. Dried rivers and gullies indicate that billions of years ago, there could have been an abundance of liquid water on the surface. Strong sandstorms are blowing in the rarefied atmosphere.

Mars has 2 moons: Phobos, meaning fear and Deimos, meaning terror, named after the sons of the Greek god of war, Ares.

The alchemists have attributed Mars to the metal iron becouse of its color.

Sun
Gas Planets
Dwarf Plants
In order to optimize our website for you and to be able to continuously improve it, we use cookies. By continuing to use the website, you agree to the use of cookies.OKMore
Scroll to top