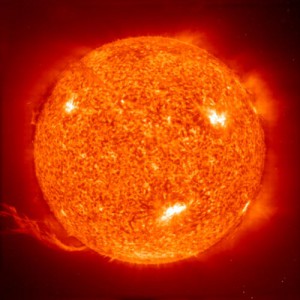 Illustration:
An image of the sun by the probe SDO Solar Dynamics Observatory in the red range of the solar spectrum with blowouts (protuberances).

The sun is one of the 200 million stars of our galaxy. Through its large mass, the sun holds the planets in their orbits. From the remnant of a supernova The sun’s gas has contracted before approx. 5 billion years. The sun consists of plasma-shaped hydrogen, helium and traces of other elements. Via nuclear fusion, energy is released as x-ray, UV-, light- and infrared rays. In approximately 4.8 billion years the oxygen will not longer be sufficient for nuclear fusion. then the sun will swell to a red giant star, collapse, explode and glow as a supernova. A dense white dwarf and planetary fog will remain.

For the Romans, the sun was the sun god Sol. The Greeks called the sun god Helios. The element helium was named after him. A day of the week was also named after the sun.